You are here: Home

In the headphone module, we enclose the driver with 2 volumes.  The rear volume is usually small and often houses onboard electronics and battery.  The front volume, in these analyses is considered to be sealed, but in reality is rather variable depending on user fitment.  Sometimes manufacturers choose to implement a deliberate leak to reduce the variation.  In the following analyses, I examine the effect of enclosing each side of the driver on the frequency response.

Starting with a driver without damping in the frame vents, below is the effect of adding a rear enclosure and sampling SPL as a baffled system 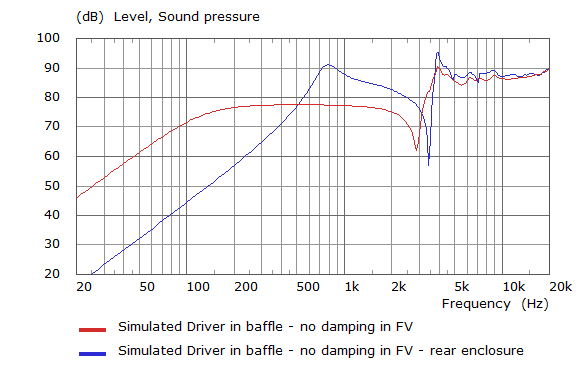 Here we can see that the bulk of the increase in the fundamental resonance is due to the small rear enclosure as it shifts to ~800Hz.  Higher in frequency, we also observe that the midband dip shifts higher.  As seen in earlier animations of pressure within the driver, this dip is controlled by the air surrounding the driver, the cavity behind the diaphragm and the frame vent holes which evolves into a resonance formed between the cavity behind the dome and the bass port which produces the peak in output at 4kHz.  This degenerate modal behaviour makes is difficult to separate out the causes, however damping of the frame vents does suppress one of the modes to clarify its influence. 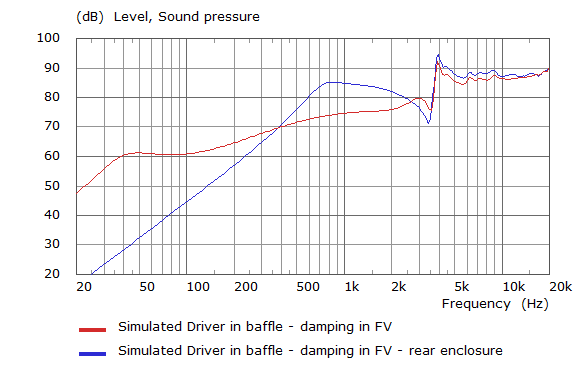 When the frame vent holes are damped, the magnitude of the dip reduces and the bass port resonance dominates.  Interestingly, the characterisitc frequency response when the rear enclosure is added is not too different between the undamped and damped frame vent cases, but without the rear enclosure, the free responses are very different.  The acoustics appear to dominate.

Starting with a complete headphone module, the effect of removing the rear enclosure and replacing with a baffled radiation condition, sampling SPL within the front volume with elliptical cushions 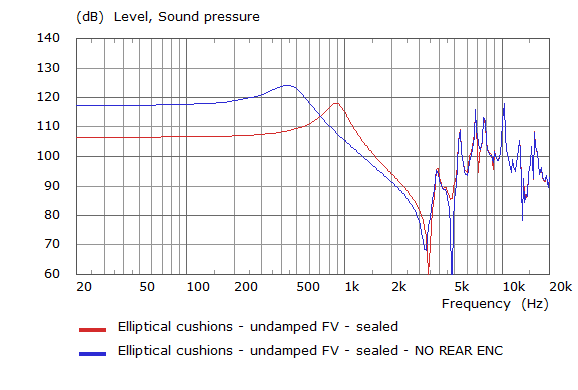 Air that is enclosed at low frequency can be thought of mechanically as a spring acting on the driver diaphragm.  In the headphone, there are 2 parallel springs in work, one at the front and one at the rear of the driver.  Here we can see that the 900Hz fundamental resonance drops to ~450Hz confirming that, based on the above, the rear volume is the dominant "air stiffness" raising this resonance.  This makes sense as it is the smaller added volume.  Removing the rear volume, removes the constraint on displacement and in turn pressure which results in an increase in SPL of ~11dB at low frequency.  This illustrates that the overall frequency response can be balanced by sizing the rear enclosure as the driver acts against lower restoring force.  A small decrease in the dip resonance frequency can be observed because the undamped frame vents have influence.  The upper resonse, which is dominated by internal acoustic modes within the front volume appears choppier implying that the presence of the rear enclosure had a damping effect on some of these resonances.  An interesting change at 4.9kHz is the narrowband dip when the rear enclosure is removed, which is actually an acoustical resonance of the long axis of the front cushion volume, and similarly another front cavity resonance at ~7kHz, both appear affected by the omission of the rear air volume.  This could suggest that front volume acoustic modes are partly controlled by a transfer of energy via the diaphragm into the rear acoustic domain.

Same analysis but with the frame vents damped. 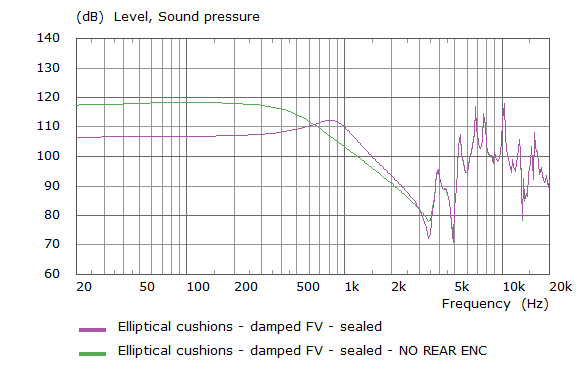 Above this, the frequency response appears identical, and the choppy behaviour that was observed in the undamped case without a rear enclosure has disappeared.